We delve into the depths of our design archives to revisit the Umbraco UK Fest designs over the past 7 years.

Every year we host Umbraco’s biggest UK event, The Umbraco UK Festival. In the run-up to this year’s 80’s throwback theme, we’re delving into The Cogworks' design archives to check out the ideas and inspiration behind each year’s design.

Our very first design was a simple nod to the seasons. Back in the day, we had less than half of the attendees we do now and other than this blustery t-shirt, note-pad and pen the design elements didn’t go much further.

In 2011, head designer Dan brought these little robots to life, to coincide with the launch of Umbraco 5.

Based on the software launch, ‘5 is alive’, the little short-circuit Umbraco bots went from commuting doodles, to pin badges and went down a storm at the event!

Taking inspiration from a giant Space Invader sticker on The Cogworks HQ wall, 2012 saw the revival of the iconic 80’s game in all its pixelated glory.

The arcade classic made its way onto all the festival merch and began to invade other digital elements of the event.

This year saw a call-out to Umbracians far and wide. The competition winner Ian Ball gave us this bespectacled character as the first real face of Umbraco UK Fest.

The Cogworks team chose the geeky little chap to cover all the merchandise... because who doesn’t love a fun festival mascot, gap-toothed and all?!

As the Umbraco UK Fest was really taking off within the dev world, so was 2014’s design.

Head designer Dan launched the merchandise into the solar system, with a fleet of space-bound rockets ending up in goodie bags.

The mission: an Umbraco exploration, while keeping it fun of course!

As many of our Umbracian’s come from overseas, this year’s design was all about showcasing London-centric iconography. The Cogworks’ designers put down the pencil and had London line-drawn by illustrator Emily Sanders.

Taking inspiration from the local area, Emily drew buildings in Clerkenwell and sketched up a new take on our cogs. But you can’t really get much more London than the city’s native skulker: the fox. 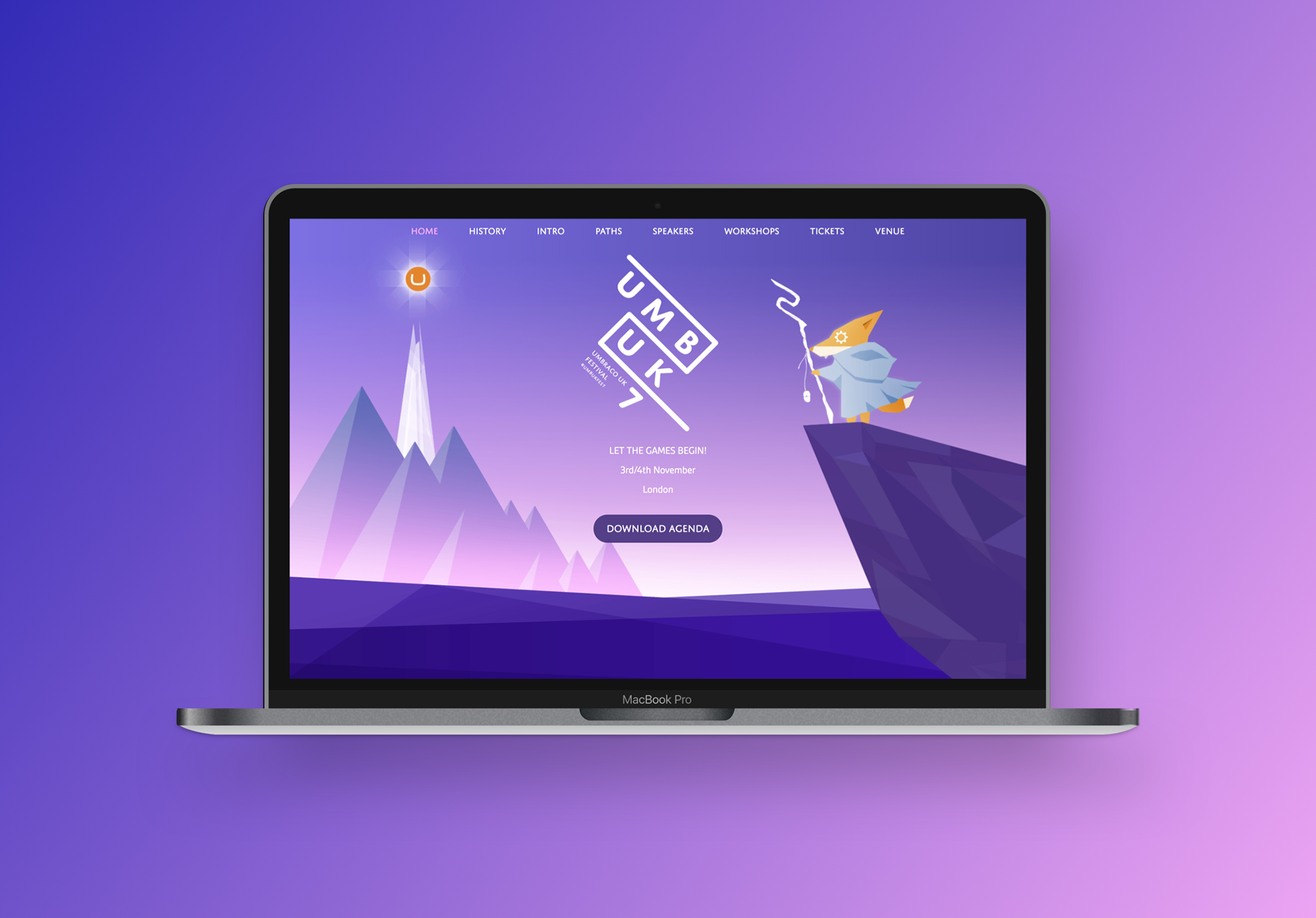 The year of the fox (or the indie gaming fox at least!) Last year’s Umbraco Fest sent its attendees on an Umbraco quest.

Lead designer on the project, Josh, took inspiration from the majestic scenery and game-play of indie favourites Journey and Monument Valley. Alongside the minimalist design, he created a much-loved character to guide our Umbracians through the festival, as they gained and shared Umbraco knowledge.

This was the first year branding started to develop alongside the design, with a custom website, wider merchandise and an all-encompassing theme. 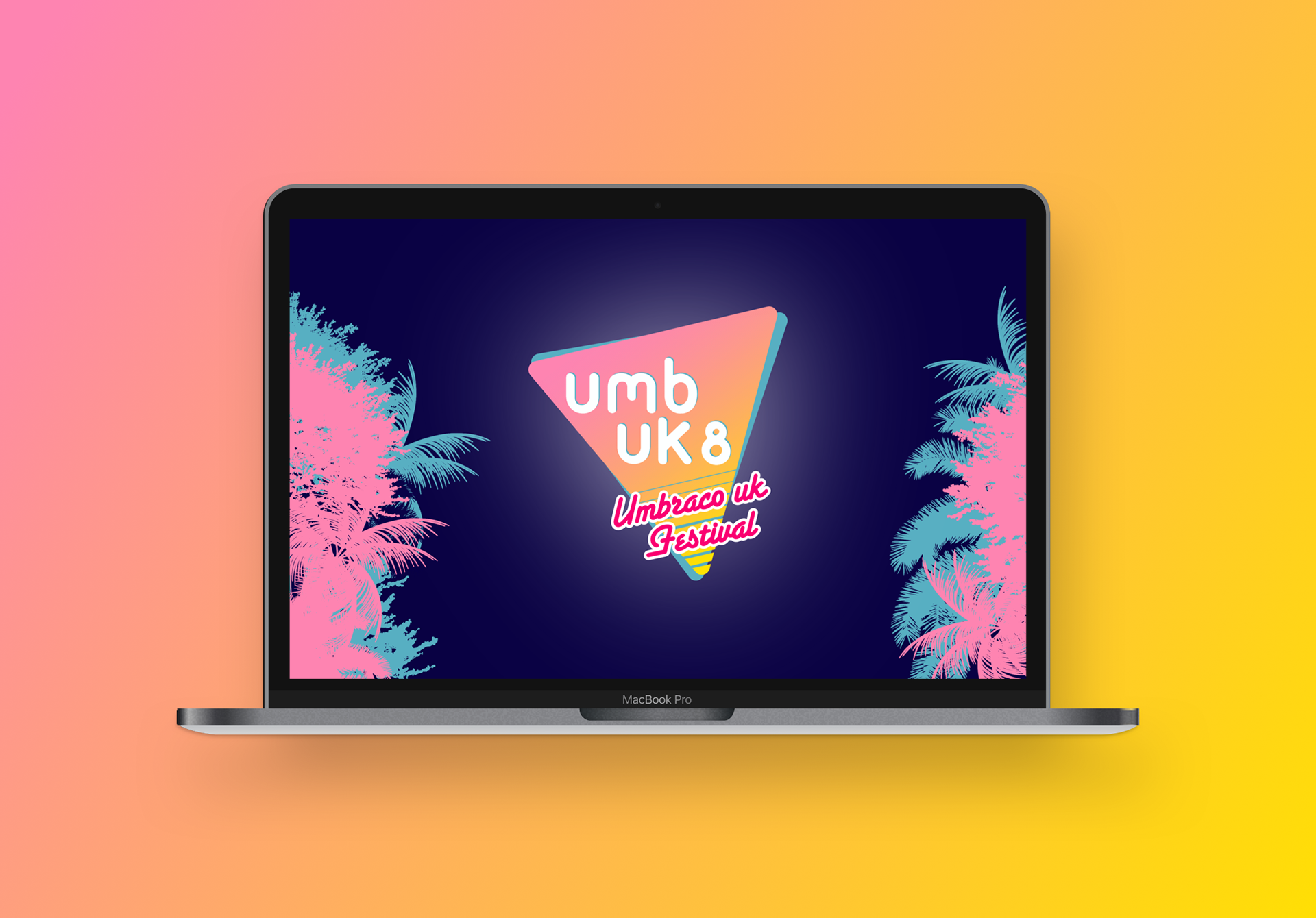 Lead Designer for this year’s festival, Josh, has got a thing for the ’80s. And this year he’s bringing you a London X South Beach mash-up. Think Miami Vice, a throwback to the era of dodgy flares, power-print shirts and glowing neon flamingos. And this year you’ll be able to follow the theme from the website to the merchandise, and even to the venue!

As the festival has grown, so has the design process, from just t-shirts and badges to an all-out themed event (don’t fear...you can still get your hands on pens, notepads and some other really cool merch!)

This year The Umbraco UK Festival is going to bigger, better and a whole lot more tropical than ever before. Get your tickets here! You can keep up to date with all our Umbraco Fest goings-on by searching the hashtag #umbUKfest.

Get in touch to see how we can transform your digital presence.

Send us a message